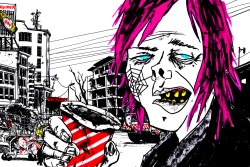 NEVER DRIVE A CAR WHEN YOU'RE DEAD

The awkward hero stumbles over a long forgotten piano. Music leads him from his run down existence out into the city life. There he plays a last funeral march to all the deadbeat figures on the sidewalk.

Gregor Dashuber is originally from the Bavarian countryside. Feeling a little cramped after 20 years of growing up in Oberammergau, he moved to Berlin to study Animation at the HFF Konrad Wolf in Potsdam Babelsberg in 2002. During studies he specialized quickly in hand-drawn 2D animation. Together with Annette Jung he realized a ghoulish version of Edgar Allen Poe's Story " The tell tale heart" in 2006. His morbid graduation film "Never drive a car when you´re dead" was finished in 2009. It has been screened on several festivals around the globe, entertaining and disgusting people at the same time. He is working in the Berlin based animation studio TALKING ANIMALS.

Director Gregor Dashuber and Composer Marian Mentrup will be available for Q&A after the screenings.