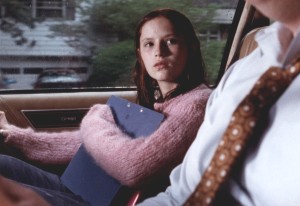 Experience is not always black or white. But can it be both? Decide for yourself as you observe two young sisters confronted with an undesirable houseguest who invades more than just their home.

Born in San Francisco, Andrea Ashton relocated to New York City in 1992 in pursuit of a creative career in both writing and filmmaking. After graduating from New York University's film program in 1995, she immediately began working on independent feature films in positions ranging from assistant to the director to co-producer. Her short, "Pick a Color," was several years in the making as she juggled career, ambition, and her latest passion: raising her 2-year old son Aidan.

"Pick a Color" is intentionally designed so that no two people walk away from it feeling exactly the same. It comes too close to our personal experiences, our morals, and our convictions about human sexuality to have a universal meaning. Sometimes the dividing line of where one's sympathy will lie is determined simply by their gender, other times, by the complexity of their insecurities.
From the screenings thus far, it has proven itself to open up dialogue between men and women about the implicit gender differences in perceiving sexuality and appropriate versus inappropriate behavior. Overall, my intention is to create dialogue about an often taboo subject, and idealistically, inspire a better understanding of human nature. (Andrea Ashton)