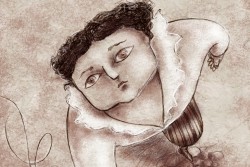 THE MAN WHO SLEPT

Sofia lives with her husband and really loves him. But he sleeps all the time ; and Sofia has to admit that he will maybe never wake up...

Inès Sedan was born in 1976 in La Plata, Argentina. She studied fine arts and graduated from La Plata Fine Arts school "Francisco A. de Santo" in Artistic Drawing in 1995. At the same time, she studied clarinet at the National Music Academy Gilardo Gilardi during 10 years (1986-1996). Between 1996 and 1998, she studied Cinema at the National University, as well as Animated Cinema at Buenos Aires Film Institute. She graduated in Animated cinema Direction. She arrived in France in 1999 and worked for Ellipsanime, Sabotage, No Brain, among others, as a 2D and 3D animator.