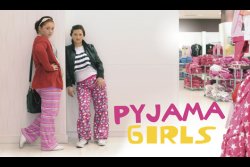 Pyjama Girls presents the chaotic friendship of Irish teenagers Lauren and Tara as they navigate the trials of life, dressed all the while in their uniform of rebellion: pyjamas. Balancing tenderness with hilarity, Pyjama Girls tracks the explosive micro-dramas of teenage life against the bleak backdrop of Dublin's inner city flats. Lauren's future hangs in the balance as she takes part in street violence with rival teen gangs and faces expulsion from school. Over the course of the film we learn about the challenges that life throws her - from her addict mother to the disruptive world of the flats - and understand the crucial importance of her friendship with Tara.

Maya Derrington co-founded Still Films and produced feature documentary Seaview in 2007, directed Pyjama Girls and is currently producing Still Films' fourth feature, Build Something Modern. For television, Maya has produced a primne time series, THe Master's Apprentice for RTÉ ONE and music series, Blastbeat for RTÉ TWO, both for Tyrone Productions, as well as two series of the RTÉ Young People's project Sweded TV for Still Films. She is currently producing a third YP series for RTÉ, StereoSwipes. Other credits include the award winning Imperfect Day - an arts documentary about James Joyce's Ulysses for RTÉ ONE.