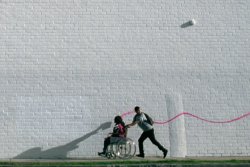 Oscar got caught spraying graffiti. Now doing community service at a nursing home, he meets Isabel who is suffering from dementia. At 84 years, Isabel may be a little "old school", but soon the entire block is covered with her pink tag.

Justin Tipping is a recent graduate of the American Film Institute Conservatory (MFA Directing) where he wrote and directed several short films. Justin got his start directing and editing music videos and is currently represented by United Talent Agency as a writer/director.