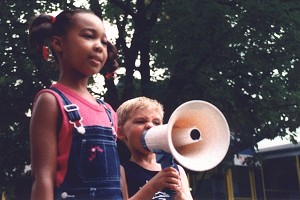 The Greek word "agora" refers to a space set aside for public gatherings, such as the ancient marketplace. "Agora" is used in the English language as a prefix referring to a crowded, chaotic public place. See "agoraphobia". Agora, a short film by Chris Newberry, explores the potential for panic in a child lost in a crowd. Shot with a child's perspective in mind, it follows a little girl who has been separated from her mother. The girl must find the courage to help a stranger despite daunting circumstances and bizarre surroundings.

Chris Newberry graduated from Northwestern University before returning to his native Minnesota to direct his previous short, "2o/2o Vision," which received significant media attention when its featured player, Jesse Ventura, was elected Governor in an upset election. Newberry, recipient of a 2000 Jerome Foundation Media Arts Grant, recently earned an MA in Feature Film at the University of London.