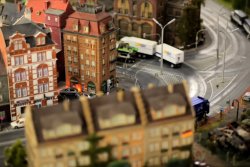 An enclosed cosmos - just like a hurdy gurdy, that starts over to play its song anew.

The film observes people and their mannerisms and puts their individuality into a larger context. Time lapse and tilt-shift techniques are used to create a fairytale depiction of everyday life. This film technique allows us to step back and observe our planet from a distance. From here earth seems to be a mere anthill. People move around our planet like lemmings. Everyone is taken in by their own personality and completely convinced of their individuality. Subconsciously however, everybody moves along the same path, following the person in front of them. People do not even realize they are all going with the same flow. Mainstream is a new kind of individuality or is individuality a new kind of mainstream? The result is an interesting tension between the inner and outer perception of our world. Football matches become rhythmic waves of attack and defense, train stations and airports are flooded by great tides of people. Our own habitat is a playing field and we move around on it like pawns. This film portrays a truth that can be derived from the universality of the individual.