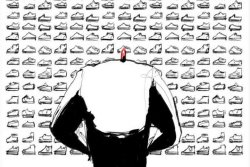 A pit bull's patience is tested as his owner is drawn towards both the endless offerings in a surreal shopping centre and the affections of a classy dame. A dynamic film statement against commercialism and consumerism - people who get lost in a gigantic shopping mall.

Robert Proch born in 1986 in Bydgoszcz. He graduated from the Academy of Fine Arts in Poznan. His interests are painting, graffiti and animation. His animated film Virus (2009) was screened and awarded at many festivals, such as Architecture & Design Film Festival in New York. In 2009 it received a special award in the Best Music Film category at the ANIMATOR - 2nd International Animated Film Festival in Poznan.