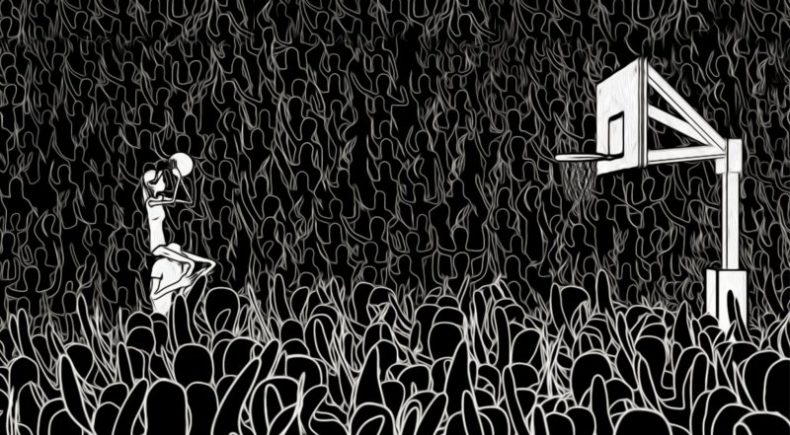 LOVE IN THE TIME OF MARCH MADNESS

Melissa Johnson hit 6'4'' tall in 8th grade. Although this made her an instant basketball star, LOVE IN THE TIME OF MARCH MADNESS explores her hilarious and awkward true-life misadventures in romance as she dates shorter men and gets cheered or jeered wherever she goes. Blazing with honesty and dry humor, this animated 'tall short' about embracing difference is certain to disarm and delight.

Melissa Johnson is a writer and filmmaker living in Venice, California. She is best known for Brittney Griner: LIFESIZE a documentary currently airing on ESPN within the acclaimed Nine for IX Series as well as her award-winning feature documentary, No Look Pass, now on Showtime and recently selected for The American Film Showcase. Her popular first-person essays have appeared in The New York Times, Salon.com and Boston Herald. Robertino Zambrano Robertino Zambrano is an Australian animation director whose work includes the film Love in the Time of March Madness a winner at the Tribeca Film Festival. His animation work has also been featured at the Annecy International Animation Festival, SIGGRAPH and Encounters Short Film Festival in the UK. Robertino works out of his Sydney-based production practice, KAPWA Studioworks.

“I made LOVE IN THE TIME OF MARCH MADNESS because it’s in my bones. Literally. It’s a dark comedy about my dating life as a woman who hit 6’4’’ tall in 8th grade at 127 pounds with size 12 feet…and lived to tell about it. Wherever I go I receive endless commentary from strangers about my height and unsolicited opinions about the appropriate height of my man, whether I am standing with one at the moment or not. There’s an assumed familiarity with me – the emotional equivalent of a pregnant woman who gets her tummy rubbed wherever she goes. Only I’ve been ‘getting rubbed’ for about twenty years. “Remember, people are always going to be looking at you,” my mother warned me as a kid, “So what are you going to do about that?” I started keeping a notebook in my bag, jotting down my favorite encounters. My experience is sometimes painful, other times flattering, often hilarious, and always revealing about the conditions we place upon one another about gender roles and physicality. I’m grateful for my unusual vantage point through life and made LOVE IN THE TIME OF MARCH MADNESS in hopes of helping others embrace their bodies as well. After all, we don’t see other people the way that they are, we see them the way that we are. We are canvases for each another.” - Melissa Johnson

“This production was a symbiotic collision of disciplines - I felt the power of Melissa’s storytelling would be best expressed through the medium of animation. What better way to express the feeling of dipping into one’s thoughts and memories - a swirling collection of happy days, hilarious anecdotes, moments of confusion, growth and discovery - than through the amorphous art of manipulating line, form and colour to tell this universal story of discovering one’s self.” - Robertino Zambrano