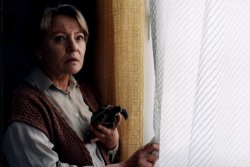 Everything seems to be as usual: the decaying house, the dirt, the noise and the ignorant neighbours. It's Mrs Farbers turn to do the stairways and the hall. She cleans the dirt away and also tries to clean away the neighbour's humiliations. They have added up throughout the years. Until enough is enough. And today is enough.

Born 1966 in Westerstede, Germany. 1987-93 studies literature and art at the University of Hildesheim. 1994-95 employed at "Cine Service" a film equipment rental service. Since 1995 studies at the German Film- and Television Academy (dffb). Freelance work as camerawoman and camera assistant.