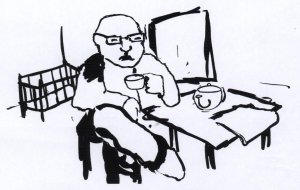 A moving portrait of loneliness. The story of a man who is estranged from those around him and lives out his life utterly alone.

Born in London in 1968 Becalelis Brodskis spent his childhood in France, Spain, and Morocco. In 1991 he graduated in Fine Art from Norwich School of Art. Earning a living through stone carving, he continued to develop his own language. He began turning his drawings into animations, and subsequently went to the Royal College of Art, receiving an MA in animation in 2001. He now lives and works in London.