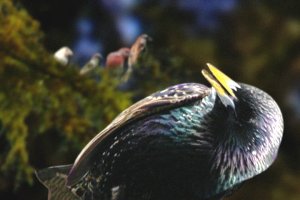 The ritual hierarchy at a backyard bird feeder, accompanied by saxophone ensemble.

Geoff Adams is a video, and music maker in Providence, RI. He has directed TV spots, music videos, and corporate video. Geoff is the creator of the live-action segments for the PBS animated show Arthur produced by WGBH in Boston. Geoff's most recent personal video work, Birdbeat (fugue) combines improvised music and animation inspired by backyard bird behavior. Noise In My Backyard, made in 2000, is a personal documentary exploring the dilemmas of backyard ecology. Noise In My Backyard was screened at festivals in 2001 and won top awards at the Athens International Film & Video Festival, and The New England Film & Video Festival. Geoff has received many awards and grants, including two Daytime Emmy Awards, a Peabody Award, two RI State Council on the Arts Fellowships and a Production Development grant from the LEF Foundation. He is a saxophonist and has played with jazz, rock, funk and blues bands. Geoff is currently an adjunct faculty member in the Film, Animation and Video Department at Rhode Island School of Design.