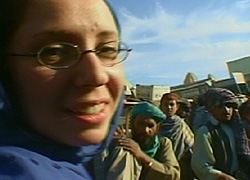 From Ground Zero to Ground Zero is the story of Masuda Sultan, a 23 year old, Afghan-American woman who travels back to Kandahar, Afghanistan to see what has become of her country. Masuda is delighted to see the yoke of the Taliban lifted, but horrified to find out what happened to her family. Seeking refuge from the American bombing, a large number of her family escaped to the small village of Chowkar-karez, 60 miles north of Kandahar. On October 22, 2001 Chowkar-Karez was attacked by the American military. 41 civilians were killed. 19 of them were members of Masuda's family. Masuda who supports America's effort against terrorism wants to know why her family had to die in the desert.

Jon Alpert has distinguished himself as an award-winning journalist. In 2001 he received his eleventh National Emmy Award for News and Documentary Programs and his first National Emmy for Sports Documentary. Alpert also serves as co-director of the Downtown Community Television Center (DCTV). Every year, this not-for-profit organization trains over 2,000 students in video production and loans video equipment to more than 400 community organizations.