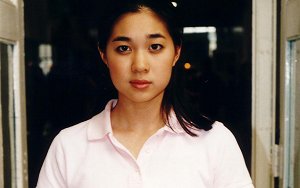 A seemingly normal day at school turns into a surreal pursuit when 15-year old Alice (Kathy Lee) walks in on her best friend Wendy (Jenna Ushkowitz) hanging herself in the girls bathroom. Alice and Wendy are diligent, overachieving students in school and polite, well-behaved daughters in their Chinese-American community. When Alice inadvertently walks in on Wendy's aborted suicide attempt she embarks on a journey to find out why. As she retraces Wendy's path, she uncovers a fantastical and deadly world of familial obligation, competitive pressure, and societal expectation. But just whose reality is it? And can she prevent the tragedy from happening again?

Georgia Lee is an award-winning writer/director who shot her first film, THE BIG DISH: TIANANMEN '89 (B&W, 16 mm) over the summer of 1998. It was THE BIG DISH that first brought her to the attention of director Martin Scorsese. In the summer of 1999, she made another short film, BLOOM (Color, 16 mm), which has been purchased by PBS and has aired numerous times as part of their Reel New York series. "Educated" is her third short film and her first since starting to work under mentor Scorsese. She is currently developing her first feature film for which she won the Jerome Foundation New York Media Arts Grant Award. Ms. Lee graduated from Harvard University and is currently a Consultant at McKinsey & Company in New York City.