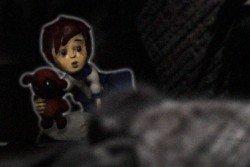 Teddy’s End is an anti war movie. It is about the horrors of war, and the affect which violent acts of war have on the lives of young children. The short film follows the main character, represented by death, to a Warfield close by a destroyed village. He arrives there shortly after the last soldiers died in battle and is about to do his duty. By doing so he goes through a sequence of visions, or flashbacks, in which he sees the climactic events which have taken place on this very battle field. These flashbacks include visions of two soldiers who stumbled across an elementary school which has been destroyed by the devastation of war. These soldiers are the last two remaining survivors from their outfit. They investigate the area, finding the only surviving child of this demolished school, a young girl. The viewer observes Death going through a series of emotions. These emotions covey to the viewer symbolically that, even Death himself cannot comprehend why the humans are constantly at war with each other, causing so much pain and suffering in the world.

Jan Philip Cramer was born in Neuss, Germany in 1979. and studied Animation at the Academy of Art College in San Francisco. Teddy's End is his first film.