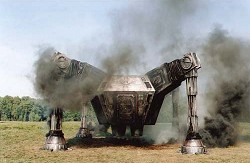 INVASION OF THE PLANET EARTH

An alien Soldier lands on a clearing in a forest. Mistaking the trees for a massive foreign army, he confronts them with some of the meanest weaponry in the universe. But for some reason this invasion doesn't go as smoothly as usual...

Moritz Langer studied physics in Heidelberg and Berlin, worked for student film productions and directed and produced a few short films on 8 and 16 mm. He works as a screenwriter and translator.