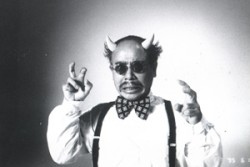 In a red kimono, her arms tightly bonded, she stares at the lens with a lifeless expression. Behind the camera a curious little man is grunting, snapping pictures with a set of five different cameras, drenched in sweat and animated like a devil. The man is Nobuyoshi Araki, and he is the most controversial and celebrated Japanese artist of his time. With more than 300 books he is also the most published photographer in the world. At 62 one may wonder what keeps him running. After forty years of claiming to have slept with every woman he shot the photographer gives not the least sign of slowing down, nor of boredom with his favorite subject matter: the female form. For New York Filmmaker Travis Klose, Araki opened his doors, and let in a camera crew to follow his every move for a month. Thriving on little sleep, shooting up to 40 rolls of film a day, and running all over Tokyo, Araki appeared to be nothing short of a Tex Avery character. Klose captures the artist's immense personality and energy while simultaneously revealing the most intimate and fragile aspects of his character. Interviews with Bjork, Takeshi Kitano, Richard Kern, Daido Moriyama Musical Score by DJ Krush

Graduated in Film and Television from New York University, Tisch School of the Arts in1999. He has been working as a cameraman and location s assistant on various important productions such as Spider-Man (Sam Raimi, director) and Hysterical Blindness (Mira Nair, director). He is currently developing his first narrative feature project, Anime, and works in New York as an Editor.