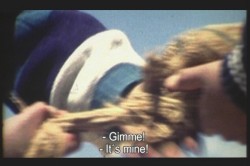 Two children from the Puna Jujeña (a desert in the northwest of Argentina) defend what belongs to them with the same way they leave and forget what doesn´t.

Maria Florencia Alvarez was born in Buenos Aires on November 16th, 1977. She finished all courses at the Film School at "Instituto de Arte Cinematografico" in Buenos Aires and is currently working on her thesis film. She wrote and directed several fiction and documentary shortfilms, some of which received awards at different national and international film festivals. In addition, she edits her own productions, as well as work from others director as a living. In 2002, Maria Florencia shot "Upon the Earth" in the desertic region of Argentina northwest called La Puna . The film was blowed up from super 8mm to 35 mm in 2003 and selected to participate at the "International Film Festival Rotterdam". It has received the First Prize to the Best Short at "Buenos Aires, IV Festival Internacional de Cine Independiente", the Second Prize at the Contest "Version Española", The Aprile Prize and the First Mention from the Jury at the Milano Film Festival. Also in 2003, Maria Florencia finished her first medium-length documentary film entitled "Portrait of a Family-Aguirre Family", which was also shot at the Puna Argentina. Nowadays, she is working in the Postproduction of her new short film called "Black Dog'.