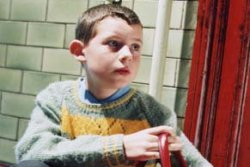 A SMALL PIECE OF PARADISE

A Small Piece of Paradise is a short film that explores the reality behind some West of Scotland stereotypes. A sports loving son, a domineering father and a strong resilient mother are divided by their different experiences, and only after a ten year period can the mother bring the father and son to a meaningful understanding of each other. This eventual success makes this story a clear example of love conquering all, even in the bleakest situations.

Marc had worked in all the areas of production until settling into the position of an assistant director. Marc is now a respected director within Scotland's film industry. His last television series for Channel 4 earned him a BAFTA Award nomination as Best Director New Fiction. Marc currently has two features in development.