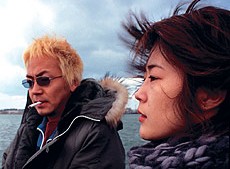 Ryuichi Hiroki is one of the most significant voices of Japanese cinema today. The film is an adaptation of Maria Akasaka's novel of the same name. Rei Hayakawa (Shinobu Terajima) is a freelance writer that doesn't fit the description of the typical Japanese woman. She hears voices in her head, and has sleeping problems, eating disorders and drinks excessively. On Valentine's Day, she meets - and is smitten by - the truck driver Takatoshi (Nao Ohmori from Ichi the Killer). She joins him on a journey in his bumpy and shaky truck - which vibrates in tune with her uneasy soul. Vibrator is an economical, stylish and beautiful film, letting us inside a modern woman's inner being. An excellent and different road movie.