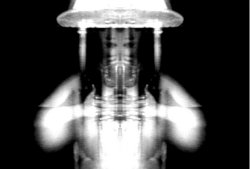 MALDOROR: A PACT WITH PROSTITUTION

Based on the epic prose poem by Lautreamont detailing the metaphysical adventures of the sinister Maldoror. This episode involves Maldoror's hallucinatory encounter with an entity in the form of a glowworm that promises him enlightenment in exchange for the murder of a wraith called Prostitution. Maldoror, enraged, slays the hideous worm and makes love to Prostitution sealing his arcane initiation by which he is enlightened and transformed into a demon enemy of humanity.

Micki Pellerano graduated in 2002 from NYU with a degree in Experimental Theater. He lives in Brooklyn where he studies the paranormal, makes artwork, and writes for counter-culture publications.
Nate Archer has a broad backround in experimental video and music production. He currently lives in San Francisco where he actively contributes to film projects with versatility.