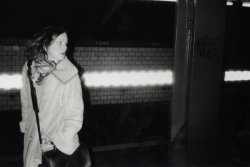 Solange confesses to a conference room of silent professionals that she realizes she's not in control of anything anymore. This documentary-like pronouncement, starkly juxtaposed with violent, frenetic images of what happened, articulates how Solange surfaced from the dark underground and into this new understanding of herself. Written as a monologue by Tom Noonan for Keyser months before she was attacked in the subway, an unpredictable thing is a chilling piece of memory, struggle, and triumph.

In 1999, Brooklyn-based actor, Rhonda Keyser appeared as Solange in Tom Noonan's When We Fall At The Paradise Theatre in Manhattan. More recently, she was Marge in Noonan's Wake Up and Go to Sleep also at the Paradise. An Unpredictable Thing is Keyser's directing debut.