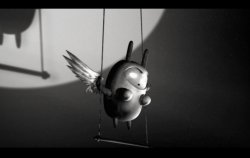 JOJO IN THE STARS

JoJo in the Stars plays out the heart-wrenching tale of two unlikely lovers: JoJo, a silver-plated trapeze artist, and the nameless hero who worships her. The film is a story of love, self-sacrifice, and jealousy played out against a black and white world that is both nightmarish and hauntingly beautiful.

Marc Craste is a senior animation director working at Studio AKA in London. Marc has designed and directed many award-winning commercials. He has also designed and directed three short films in the series PICA TOWERS that have become cult viewing (on the Studio AKA website) for many fans. His short film "Jo Jo In The Stars" won the 2004 BAFTA (British Academy of Film and Television Awards) for Best Animated Short Film, has been screened at festivals in 23 countries and has won various international awards.