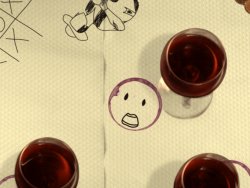 PRUDENCE 'A TORT OU A RAISON'

Joris Clerté One day in 1991, just after finishing his Fine Arts studies, Joris Clerte tried his hand at making an animated short. He fell in love with this new form. Since then, he has directed animated advertisements and music videos. When he isn't animating, he spend his time singing!
Philippe Massonnet: After studing animation in Paris, Philippe has been working on animated films, ads, music video, as well as writing songs and drawing comics.