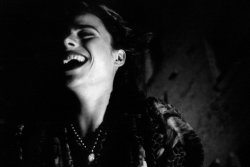 Desire's embrace will break your fall. Trust and step away.

Annie Beauchamp works as an Art Director on feature films throughout Australia. Desire Lines is her second short film after Pandora's Box, which won the silver plaque at the Chicago Film Festival, and was a finalist at the Golden Reel Awards. Desire Lines was a short film winner at the Telluride Film Festival 2000.