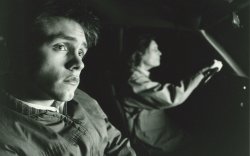 A teenage runaway finds shelter with a warm, elderly couple. Slowly, he lets his guard down - but by then, it may already be too late.

Ellen-Alinda Verhoeff was born in the Netherlands. Her former short ABBIE DOWN EAST played in 50 film festivals worldwide; Berlin, Tehran, Toronto, New York ao. It qualified for the OSCAR Live Action Short three times and has won 20 international awards. Verhoeff is a graduate of the Dutch Film Academy in Amsterdam. In New York she recently graduated from Columbia University's Master Program in Film. She is currently working on her first feature Building Atlantis.

Cinematographer Milton Kam will be attending the screening.