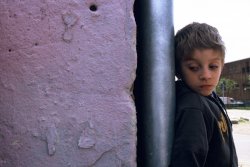 A cinema tale about a little boy who escapes his tormented life at home and discovers freedom through his will and imagination. Olli moves from closure to the open space, then from weight to weightlessness, in order to be free from them all.

Jack Rath graduated with a Bachelor of Media Arts at the Royal Melbourne Institute of Technology. He later worked in production houses and advertising agencies. During this time he made several short films and then moved to Berlin where he writes and directs for film and theatre.

Director Jack Rath and Producer Jens Freels will be available for Q&A after the screening.