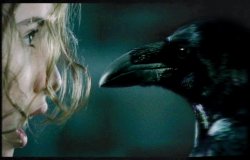 On a piece of lawn, between two buildings, a girl "Chyenne" seems to get lost in the lethargic grey and cloudy afternoon. Suddenly she sneaks up to a raven and starts a game. Soon the bird joins her and actually the game becomes a quite odd duel. Who will be the winner?

Alexander Meier (Zurich, 1971) trained as a graphic artist with Ernst Hiestand + Partner AG. Alexander is the founder of the graphic studio SIGN AND EELS and has been working as a freelance graphic artist. Since 2000 Meier has been working as freelance director and realised several projects. Alexander also teaches film and video class at the F+F school for Art & Media Design in Zurich.