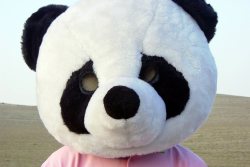 Annika has made out with almost all the guys from her high school. Passion, Bananas, blood, kissing, death and dancing. This is a teenage love short with a panda.

Marçal Forés was born in May 1981 in Barcelona. He decides to devote his life to film in '99 when he applies to study at ESCAC Film School in Barcelona. The years go by with projects like 'Improvisation 01' and 'Emotional Awareness' and 2 music videos. He continues his studies at the National Film and Television School, UK, until 2007.