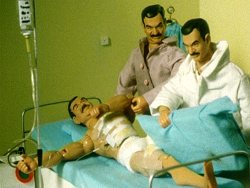 Cast:G.I. Joe and other war toys

INFINITE JUSTICE takes fragments from war reports shown on German television - Iraq war at its best - and reconstructs these frame by frame with action figures sold in the USA, suitable for children over 5. CHOKING HAZARD - Small parts. This isn't Disney. Not Team America. This is war. And we have friends on both sides.

Karl Tebbe was born in 1970 in Dortmund, Germany. He was an exchange student in the USA and then studied Arab language at the Ain Schams University in Cairo, Egypt. He obtained an MA in Applied Theatre Science at Giessen University, Germany in 1996 and has acted in various performance theatre pieces, mainly with Veit Sprenger, in Germany, Tunisia and Jordan. Karl is currently a cinematography student at the University of Applied Sciences in Dortmund, Germany and attended the International Film School in Cuba in 2002 as part of an exchange program.