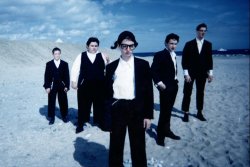 Set in 1969, Me and the Moilsies charts a Hasidic boy's journey into manhood and fall from innocence. Following his sister on an illicit trip to the beach, Sheldon discovers greasers, lovers, and a gang of Hasidic misfits. Torn between his desire to belong to the gang and his allegiance to a mysterious girl, Sheldon learns that either choice will destroy a part of himself.

Writer/director Justin Schwarz attends Columbia University's Film MFA program. During his tenure at Columbia, Schwarz has been named a Milos Forman Fund recipient and has twice been granted a School of the Arts Merit Fellowship. He currently resides in New York City where he is working on a feature screenplay and developing another short project.