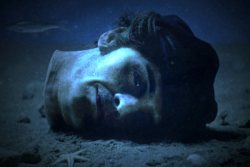 Alonso Samoza is a sailor who felt in love with 2 twin sisters. But to be able to marry one he has to kill first the other one. One day, the cargo he worked for broke down. Trying to mend it, Alonso is hurt and has his head cut off. Beyond death, he'll try to accomplish his destiny.

After a carear in animation Lorenzo Recio started to directing narrative films. Lorenzo works for the french Tv "Arte".

Director Lorenzo recio will be available for Q&A after the screening.