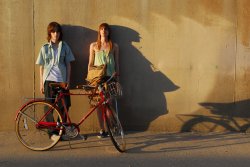 Tim Thaddeus Cahill, 27, is an up-and-coming writer/director from Southern California. His prior work includes music videos for bands like Cold War Kids and Two Gallants. After receiving an English degree from Cal State University Fullerton, he briefly studied film in London where he met local cinematographer, David Rom. The Oates' Valor brings these two together from both sides of the pond for what is Cahill's first dramatic piece and Rom's debut contribution to American Cinema. Cahill currently resides in Pasadena, California, where he spends most of his time straightening his faux Persian rug and listening to old Pearl Jam B-sides. He has three younger sisters, one younger brother, a niece, a nephew, and a neighbor named Dale who doesn't like to drive.