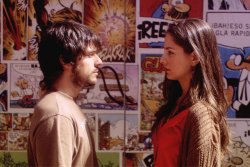 Ciro Altabas was born in Zaragoza, Spain, in 1977 and moved to Madrid to study Media Studies in the Universidad Europea de Madrid. Once he got his degree, he flew to London and stayed there for two years, studying filmmaking in the London Film School. His last short film there, "Phobia" not only went on to win more than thirty awards around the world, it was also screened in the Official Selection of the 59 Mostra di Venezia. Also, he has studied in the University of California and Los Angeles, in a course promoted by the New York Film Academy. He currently lives in Madrid.