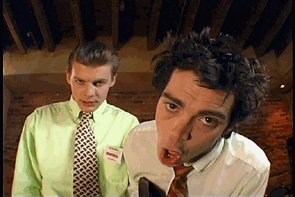 Sean McNutt is losing his mind. Customer complaints, fifty cent tips, raw chicken parmigiana and Mafioso management are gnawing away at what sanity he has left. Welcome to the world of Waiting, a comedy about the seamy underbelly of the restaurant industry as told through the eyes of Sean McNutt (Love God's Will Keenan), a waiter trying to muster the ambition to move on in life. Recently dumped and still living at home, Sean drinks himself into oblivion each night until an impulsive visit to a fetish club to see an old flame ("The State's Kern Kenney) results in an ejection from the club and a taste of leather clad justice. This is the last straw, and Sean soon embarks on a campaign of romantic retaliation. Including cameos by former adult film star Ron Jeremy (Orgazmo) and Troma topper Lloyd Kaufman, Waiting takes you into the heart of South Philly' s most notorious eatery, Broccoletti's Italian Bistro--where what goes on behind the kitchen doors is better left unknown...

Since graduating from the University of South Florida in 1993, Patrick has worked as a writer, director, cinematographer and editor. He has written and directed several award-winning shorts, including the experimental drama The Speed of Mind, currently distributed through Provisional Films. Patrick is currently working as a cinematographer on Will Keenan's Operation Midnight Climax and editing the Benny Mardone's documentary The Man Who Would Be King.