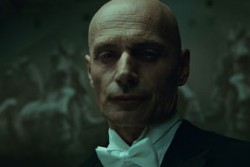 During an opulent and luxurious banquet, complete with hordes of servers and valets, eleven pampered guests participate in what appears to be a ritualistic gastronomic carnage. In this absurd and grotesque universe, an unexpected sequence of events undermines the endless symphony of abundance.

Denis Villeneuve has rapidly achieved both public and critical attention for films showcasing his powerful and distinctive cinematic voice. His films were screened to critical acclaim at many international festivals.

Distributor Danny Lennon will be available for Q&A after the screening of June 9th at 7 pm.