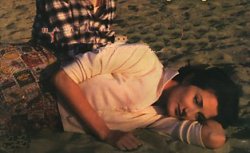 Set in the 1950s, a 15-year-old girl runs away from her home deep in the Florida swamp lands and ends up in an all-womens' rooming house where she finds a substitute family in some eccentric older women who live there.

Director and co-writer Laurie Weltz's credits include At Five and Twenty Five which aired on the USA channel.

Director Laurie Weltz has lovingly constructed a story around the intertwined lives of four women living in a boarding house in a sleepy seaside hamlet and the experiences that impact then right before America officially experiences the sixties.