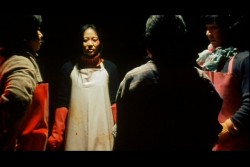 A meat market: Jung-hee, a butcher, run away from her abusive husband, Sung-chil, who gambles and even beats her. Her neighbors, pitying her situation, suggest that she eats meat to be strong.

Jae-Hee Hong graduated from the Korean National University of the Arts in 2003, and has since worked as assistant director and screenwriter for "Kim Chu-Ja", a feature film. In 2006, she was the winner of the AISFF Fund Project, and her short film "Lioness(es)" was awarded First Prize of the Seoul International Woman's Film Festival. She lives in South Korea.