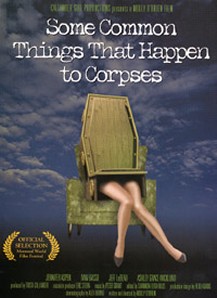 SOME COMMON THING THAT HAPPEN TO CORPSES

A lost woman finds herself in a mortuary where she meets Alcott Green, a clairvoyant mortician who loves to embalm the dead. But why is he leading her in to the embalming room?

Molly O'Brien is currently producing and directing two documentary hours for Oxygen Network about the lives and struggles of teenage girls in Tulsa Oklahoma and East Palo Alto California. In June of 2000 she wrapped production on AMERICAN HIGH, a 13-part documentary series for 20th Century Television. It will air on PBS in the Spring of 2001. O'Brien's next project is an intimate documentary about a photographer who supports herself through prostitution, and takes hundreds of black & white portraits of her male client's genitalia. The film will examine the emotional repercussioins of turning tricks for your art.