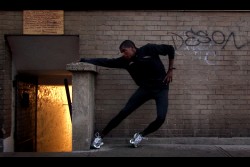 Abiyot is one of several African long distance runners, trying to make a living and career in the US. Once he was a promising member of the Ethiopian national team, but two years ago he left his country to start a new life. Weekend after weekend, he races with fellow African athletes in road races, competing over a few hundred dollars of prize money. The film follows Abiyot as he prepares for an important race. Every morning at break of dawn he tirelessly trains in the empty streets of his Bronx neighborhood. With every aspect of his daily routine centered on his training, his footsteps not only dictate the rhythm of his life, but also become the pervasive rhythm of the film. In phone calls with his family back home, Abiyot tries to convince them and himself, that the running will pay off in the long term... A film about endurance, migration and the American Dream.

Moritz Siebert (1973 Stuttgart, Germany) is a freelance journalist, a medical doctor and a filmmaker. He recently graduated from the National Film and Television School, UK.

Protagonists will be available for Q&A after the screenings.