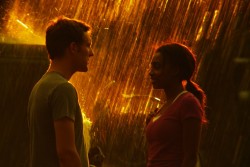 In order to fund their dreams of a banjo-music recording studio, two quirky young Park Slope residents plot to rob an old man of his valuable baseball card collection. However, when one of these awkward would-be-thieves falls for the old man's Jamaican nurse, it throws a wrench in their plans, and their friendship.

David Brundige premiered his short film "Otto" in the Tribeca Film Fesitval, and will be shooting his next feature in the fall of 2010 in Los Angeles. David received donations from over 150 friends and family to make his first feature film, "The Prospects," which is loosely inspired by events living in Park Slope. He hopes not to have to call on them again to make his second.