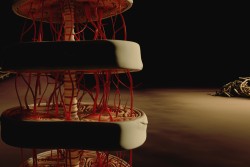 The trials and tribulations of Sliceman in the dark and frightening land of the murderchain.

Ondrej Svadlena was born in Czechoslovakia on April 6th 1978. In 1984 he escaped on foot across the Yugoslavian-Austrian border with his mother. After his BAC in 1996, he moved to Brussels to study illustration and comics. In 1997 he moved to the Czech Republic to study film and television graphics at the Academy of Art Architecture and Design in Prague where he completed his studies with a Master of Art in 2003. As a fresh graduate he moved back to Montreal, and after a month of unsuccessful job-seeking, he ended up working as a construction/renovation worker. Since 2005, Ondrej Svadlena is back in Prague where he is employed as a 3D designer/animator, and works on his personal projects in his spare time.