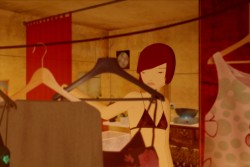 Mei Ling, an idle young Chinese woman, lives alone in her flat, waiting for her lover. One day, she finds a little octopus in the kitchen sink. She decides to adopt it to avoid boredom. The octopus grows up...

Francois Leroy studied animation and Stephanie Lansaque has worked as an art director for magazine and edition. In 2003, they traveled to Asia for the first time and loved the atmosphere so much that they decided to make their first animated short named "Goodbye Mister Chu" wich talks about the lost souls festival in Vietnam. In January 2009, they finished their second short "Mei Ling" who takes place in Hong Kong. They are now working on a third film about social issues in Vietnam.