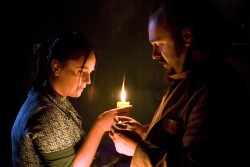 The Dark House has been called a "Polskie Fargo" but this film is darker and more twisted than anything the Coen Brothers have dreamed up. Set in Communist Poland during the Fall of 1978, this is a drama with pitch black humor. An accidental traveler stops and stays overnight at a farm house in a remote rural area. Soon he and his hosts, a farmer and his wife, become good friends. The evening ends in tragedy. Simultaneously, the story of a police investigation into these tragic events is unfolding, as officers attempt to solve the mystery of what happened on that night. For some of the investigators, uncovering the truth is not as important as hiding their own secrets.

Director Wojtek Smarzowski, Producer Feliks Pastusiak, and Production Designer Marek Zawierucha will be available for Q&A after the screenings.