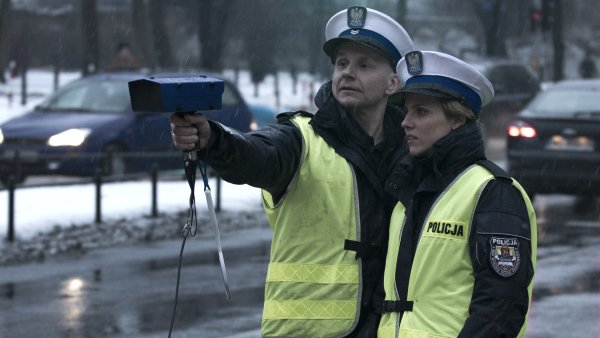 Seven friends, officers of the Warsaw's traffic police department, are leading seemingly fulfilled lives. They work together, party together, play jokes, cut small deals and race fast cars. Their small world gets rocked when one of them is found murdered. Sargent Król becomes a chief suspect in the case, but manages to escape arrest. As a fugitive he fights to prove his innocence. Slowly he begins to uncover a corruption scheme which points towards high circles of authority in police and politics in Poland.

Traffic Department is a robust tale about contemporary Warsaw. It is a subjective portrait of the city pulsing with streetlights, blinkers and alarm lights of police cruisers. It is a film about stupid drivers, absurd traffic regulations, about traffic jams, motorways that exist only on paper, and real potholed roads. About an obvious fact that if there are those who take, there must be those who give. And an emerging reflection about the subtle difference between the bribe and the token of appreciation.