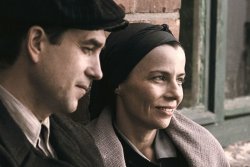 Summer, 1945. Right after the end of World War II. Tadeusz, a Polish soldier whom the war has deprived of everything, arrives in Masuria, a German territory before the war that has now been granted to Poland. There he finds Rose, the widow of a German soldier whose death he witnessed. All alone on a large farm, Rose gives Tadeusz a cold reception, but she puts him up for the night. In return Tadeusz helps her around the house, and clears the landmines from her fields. Though reluctant to admit it, Rose needs something more: protection from the looters who have been terrorizing her at the farm. Gradually, Tadeusz finds out the brutal causes behind her solitude. Against the haunting background of a landscape completely devastated by war, and where hope has become a propaganda tool, love is born between these two people from disparate worlds.