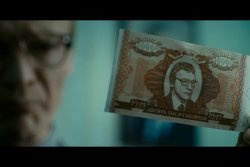 Russia, 1994. Socialism has already been destroyed. Capitalism has not yet arrived. An unknown mathematician, Sergei Mamontov, announces the creation of the 'MMM' company, printing and selling his own shares, which he calls the "notes." These "notes" are traded on a simple principle: "they are always more expensive today, than they were yesterday." Across the country, millions of ordinary citizens begin using these MMM notes, alongside rubles and dollars. Six months after the establishment of MMM, the company is in control of 50 to 70 billion dollars, and has the potential to bring down the Russian government. Based on a true story, this epic feature film traces the rise and fall of one of the largest Ponzi schemes in the world.

Eldar Salavatov was born in 1976, in Alma Ata, the capital of Kazakhstan, former republic of USSR. Eldar has no formal film education - he learned his craft through the process of filmmaking. In the late 90's he was the screenwriter for many music videos and commercials at the "Art Pictures" studios in Moscow, Russia, where he continued directing commercials. His debut in the feature film world was in 2008 with the film "SEMEYKA ADY" (THE HELL FAMILY). The second feature film was entitled "ANTIKILLER D.K." (2009). His film "PIRAMMMIDA" (THE PYRAMMMID) (2011) was released in 500 theaters in Russia and Ukraine, and it was Eldar's third feature film. He is the author and the concept maker for the comic book "DED MOROZ", which is the base for his next feature film project. Eldar also co-wrote a book called "BLOOD: SUNSET which is being published in Russia in the fall of 2012. The book is based on one of Eldar's screenplays.