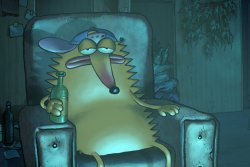 George is a hedgehog who knows what he likes: drinking beer, skateboarding, and having sex with married women. Unfortunately, his freewheeling lifestyle is interrupted by the master plan of an evil scientist who wants to create a hedgehog superclone to control the world. To reclaim his love life, George must fight back against skinheads, his deranged clone, and the entire population of Poland, which has embraced his idiot doppelgänger as the next big media idol. George The Hedgehog's hilarious, vulgar adventures are definitely not for kids!

Wojtek Wawszczyk is a director, animator, writer, cartoonist, teacher, music composer, and a polish National Film School and German Filmakademie Baden-Wurttemberg graduate. His short animated movies HEADLESS, MOUSE, FLY-AWAY PENGUIN, SPLINTER have gained awards and popularity around the world. He is one of the animators of I, ROBOT, AEON FLUX, DISNEY Commercial at Digital Domain. Jakub Tarkowski is a Warsaw based film director and animator, and a Polish National Film School graduate. Winner of the Ridley Scott Award 2003 (SFX category), he has worked as a SFX artist for Harry Potter IV and Kingdom of Heaven (Moving Pictures Company, London). GEORGE THE HEDGEHOG is his feature debut. He is fascinated with all things subversive and bizarre. Tomasz Lesniak studied Graphic Design at the European Art Academy in Warsaw, Poland. He is one of the most popular Polish comic artists. Together with Rafal Skarzycki he created the cult comic series "Jez Jerzy" and "Tymek i Mistrz." He has been awarded with many prizes, including the Grand Prix for "Jez Jerzy" at the International Comic Festival in Lodz in 2000. Tomasz also engages in illustration, graphic projects and animation.