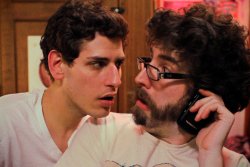 PERCIVAL'S BIG NIGHT is 87 minutes of real time in the life of Percival and Salvatore's Brooklyn bedlam universe. The film unfolds in one single shot as the two roommates are pushed to challenge what they know about modern relationships, self-fulfillment, New York, and what it means to be a part of the young creative class. One night, one room, one shot. Anything can happen.

William C. Sullivan is a graduate of New York University's Tisch School for the Arts, William was the first person in the school's history to graduate with a a double BFA in Film Production and Drama. After studying with the Stella Adler Studio of Acting for four years, he pursued his film degree with a focus on the Director-Actor relationship, with a goal of bridging the gap between the theater and film worlds. He is consistently directing in the New York Theater scene. His recent efforts include "reason to be pretty" and "The Shape of Things" by Neil Labute, productions that garnered recognition from the playwright himself. On the film side, William recently wrapped "Percival's Big Night" - an 87 minute feature film in one shot - and is working on his next project, a screenplay adaptation of a best selling novel.

Director William Sullivan and members of the cast will be available for a Q&A after the screening.