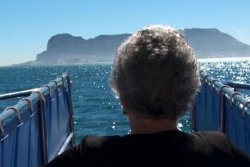 La Roca is an epic Romeo and Juliet love story between the massive Rock of Gibraltar and its neighboring Spanish city of La Linea. Despite being declared enemies by their countries, they used to be inseparable. But in 1969, Francisco Franco, the fascist dictator of Spain, closed the entrance to the British territory of Gibraltar, isolating 30,000 people without food, water, or telephone lines. According to him, The Rock would fall like ripe fruit. Indoctrination on both sides eventually forced the separation of thousands of mixed families, who for over 13 years would meet at the border every Sunday to look through binoculars at their estranged lovers, brothers, parents and babies, screaming messages from a distance. La Roca tells the emotional tale of this important chapter of world history.

After working many years in Advertising, Raul Santos left everything behind to study film in the Social Documentary Department at the School of Visual Arts in NYC. Raúl has written and directed internationally awarded documentary shorts. La Roca is his first feature-length film.

Director of Photography Carlos García de Dios and Story Consultant Pilar Haile-Damato will be available for a Q&A after the screening.